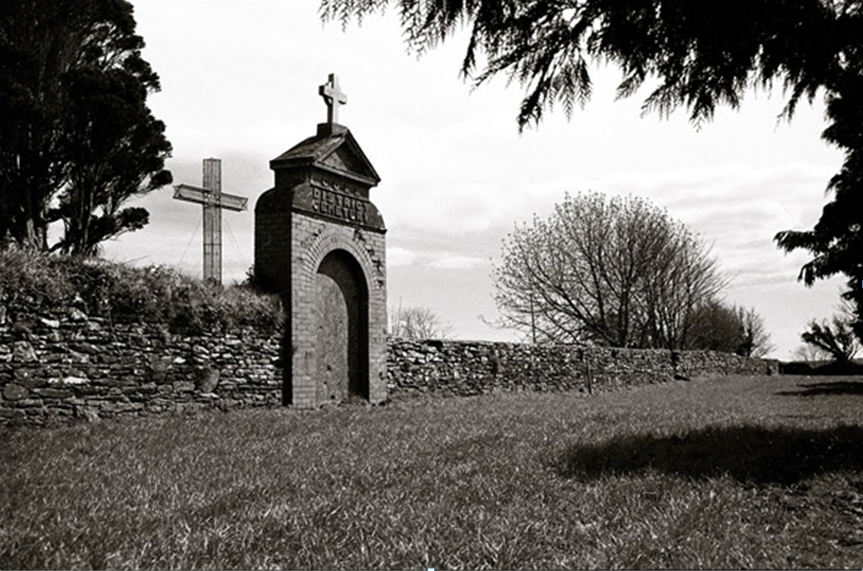 The history of All Saint's Famine Graveyard (midway between Douglas and Carrigaline in Co. Cork) makes for grim reading.

In 1846, the Guardians of the Cork Workhouse advertised for a burial ground. The pressure was mounting to find a new graveyard as the Famine death toll mounted within the workhouse. In the last nine months of 1846 alone, 10,000 people were buried in St Joseph's Cemetery and there simply was no room left for further burials.

George Carr tendered for a workhouse graveyard and was successful. The guardians agreed to pay an entrance fee of £150, and £2.10s, a year for each of the three acres on the site. Carr also won the contract for burying the bodies from the workhouse and was paid 2s.6d. for each burial. No records were maintained for the dead and pit burials were used.

According to Cork Corporation's history of the graveyard, the guardians were relieved to have solved the problem of disposing of paupers' bodies. In the Cork Examiner of February 1st, 1847, it was reported that of the102 people had died in the previous six days, 70 bodies remained unburied. The guardians attempted to use St John's Graveyard in Douglas Street, but locals stood guard for three days and nights to prevent any further burials.

However, things did not fare much better further up the road in the new cemetery.

In April 1847, a leading article in the Cork Constitution deplored the state of the Carr's Hill cemetery and George Carr's burial practices. Dogs were digging bodies from shallow graves and went further to graphically describe the area.  Letter writers took to the Constitution complained that starving dogs had been "disinterring and devouring bodies". An investigation by the Board of Guardians citing him for 'creating a public nuisance'  and on July 8th, an application was made at the petty sessions in Douglas to prevent further burials at Carr's Hill. Carr in his defence accused the paupers he employed as gravediggers, as responsible for creating the public nuisance and health hazard.

The Petty Sessions application continued with some grim detail : "Several witnesses appeared for the prosecution and described the effluvia from the graveyard which polluted the nearby road. They also described scenes of half buried bodies in deep pits which were left open overnight. In his defence, Carr produced witnesses who claimed that the burials were up to standard. They denied the existence of unburied bodies or any resultant effluvia, stating that all bodies were buried at least five to six feet under ground. Some gravediggers even testified that they ate their lunch in the graveyard each day."

Carr was subsequently fined the phenomenal sum of £300, but with the proviso that the fine would not be imposed if he put the graveyard in order - which, apparently, he did. In reality, the Board of Guardians had little choice but to use his services. Their adverts for a new graveyard resulted in no offers and so Mr Carr received a 999 year lease for the site.

Historian Emily Mark-Fitzgerald argues that Carr's Hill graveyard 'embodied the moral and practical dilemmas facing relief commitees and workhouses. 'The spectacle of improper burial and disrespect for human remains horrified local residents; the appearance of coffins by the roadside was deplored and the carts transporting bodies criticised for their stench and offensive appearance, the latter complaint resolved by Douglas officials ordering the transport of bodies at night. Testimony during the Douglas Petty Sessions referenced travellers who chose circuitous routes in order to avoid contact with the site, bodies once integrated into the larger space of a churchyard were now isolated (geogrpahically and symbolically) and further stigmatised as the detritus of society. Citizen's public complaints...convey less a sense of identification with the dying poor, and more distress at the site itself as a blight on the community, a space where the standards of human decency were routinely violated.'
"Commemorating the Irish Famine: Memory and the Monument" Emily Mark-FitzGerald. Oxford University Press 2013. p110

Following the famine, Carr's Hill graveyard acquired the reputation as a pauper burial ground and then allegedly only after disection by the Queen's College medical faculty. What is certain however is that Carr's Hill was used as a burial ground for abandoned and stillborn children and unknown individuals until c. 1942.

Around the time of it's closure, the cemetery was renamed 'All Saint's Cemetery' and became gradually distant in city memory.

In the mid 1950's, a Cork taxi driver, William 'Jack' Sorenson, began assembling and erecting a 54 foot galvanised steel cross (which could be illuminated at night) on the graveyard site - as a memorial to the Famine victims, the paupers of Cork city, the unknown and the unwanted buried there. 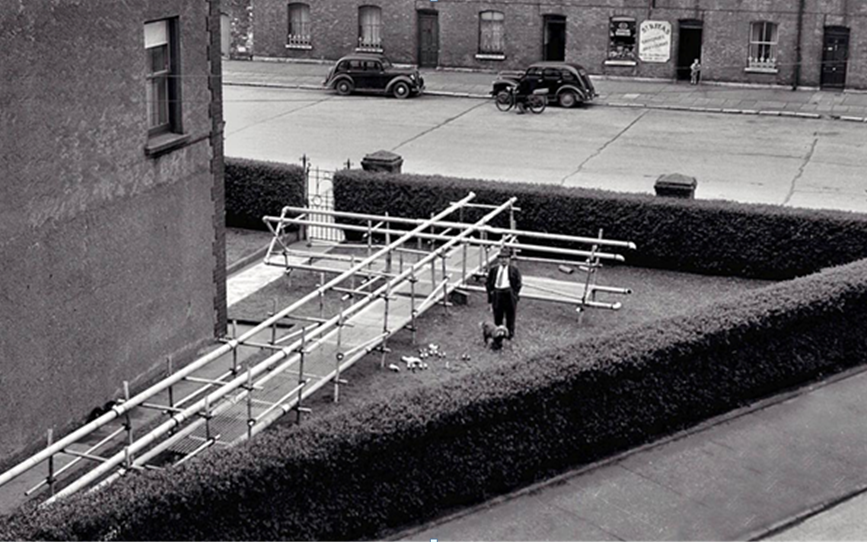 Jack Sorensen (pictured above) constructing the cross in the garden of his home on Victoria Road.
​
Jack, who was described as a "colourful character who had lived a rich life, much of it associated with the sea, before he married and settled in the city" built the monument for £400 (contributed by friends and from his own funds), building it in prefabricated sections and gradually assembling the cross in All Saint's graveyard during 1958. The structure was simply built, a frame of intersecting metal bars covered with sheets of perforated metal, welded together with stabilising wires and was dedicated on 2 November 1958. Visible from much of the city, it quickly became a landmark as it was illuminated at sunset nightly until Mr. Sorensen's death in 1979. 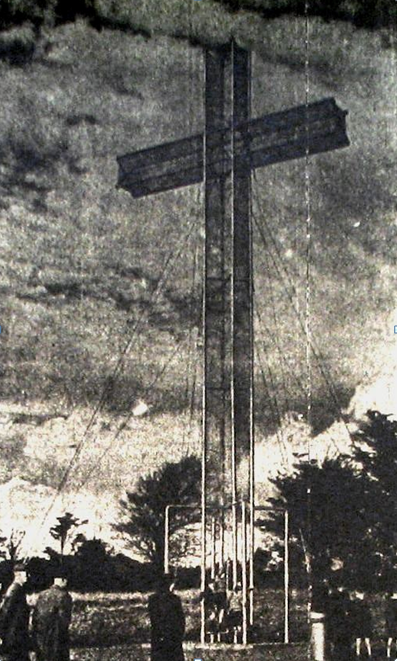 With Mr. Sorensen's death, the tradition of illuminating the cross at night gradually ended and it remained dark for twenty years. Funding was one problem, Cork Airport another. Air Traffic Control had some misgivings that the lit cross was distracting to aircraft pilots on one of the flight paths to the city airport.
​
Below: Radharc documentary from 1968. Advance to 13m30s for a segment on Jack Sorenson. 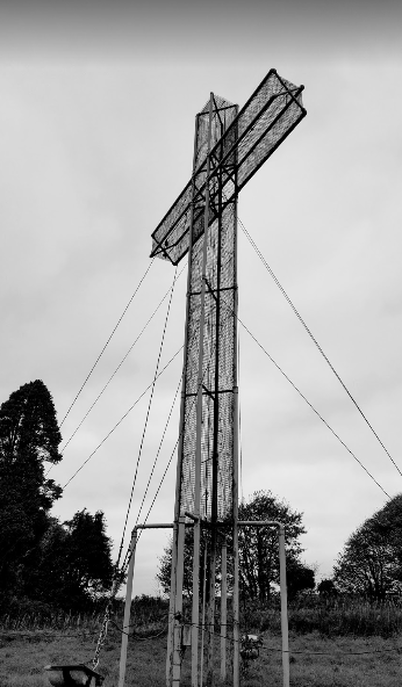 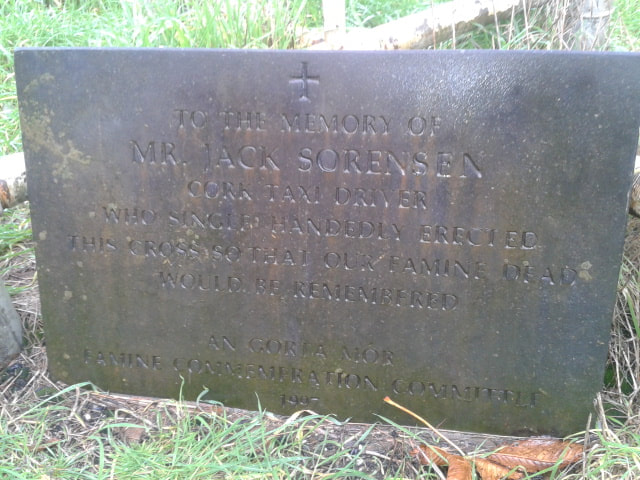 On a plaque underneath the cross is a small memorial to Jack Sorensen:
​To The Memory of
Mr Jack Sorensen
Cork Taxi Driver
Who Single handedly Erected
This Cross So That Our Famine Dead
Would Be Remembered

An Gorta Mór
Famine Commeoration Committee
1997
​In the late 1990's, the cross illuminated the night sky again due to the efforts of Aitrricity staff, who had repaired the faulty wiring and maintained it. The airport issue was also resolved as a different form of lighting approved by the Irish Aviation Authority was installed.

On the 150th anniversary of the famine in 1997, a memorial stone was unveiled by US Ambassador to Ireland, Jean Kenendy Smith. 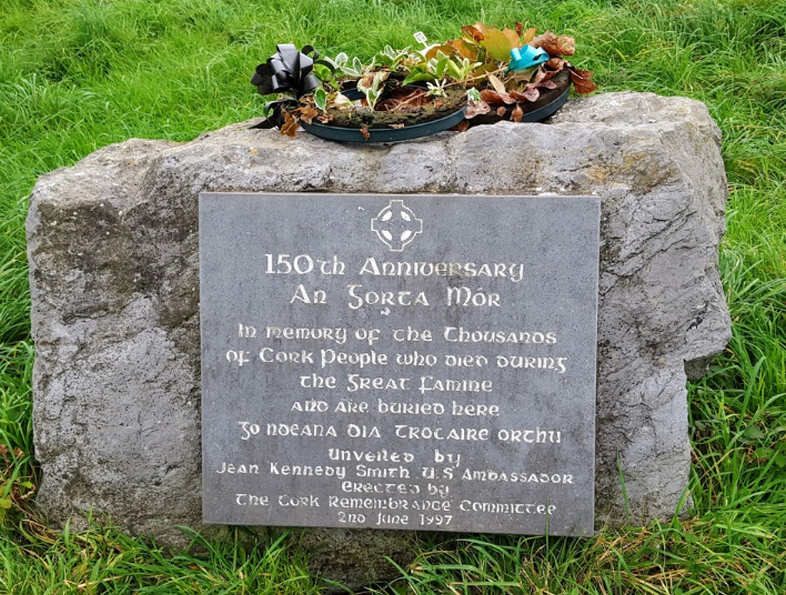 Today, while the graveyard is protected under National Monuments legislation and owned by the HSE, Cork County Council, the HSE and the Cork Famine Group have been working closely together in efforts to preserve and promote the site. However to date there is no informational signage, no heritage commemoration centre and poor access to the Famine Graveyard. An additional obstacle for public visits of the cemetery is the busy N28 main road - one of Ireland’s busiest commuter routes linking the city with Carrigaline, Ringaskiddy, Crosshaven, Minane Bridge and Tracton.

Final word goes to Shulagh O'Day with this poem written in memory of the 30,000 buried in All Saint's Cemetery:

Behind us was a graveyard
Or a field with silver gates
For there were no headstones to mark the peoples place
The people that lay resting inside this sacred place
Were placed into the earth and left to dessicate
They were from the famine era, both paupers and the like
Laid down to rest in this great place each and every night
There was a man called Sorensen,that vowed to make a pact
To build a cross so tall and strong, to mark this place of fact,
He built his cross and erected it in the middle of the field
With coloured lights and silver wire, and cement that came like steel
He came each week to check it, and replace the broken bulbs
And this went on for years on end, until one day he was gone
Now the cross just stands there, all alone and bleak
The bulbs have all blown and the graveyards gone to sleep
The gates are all gone rusty, the grass is overgrown
The people that lay resting
Their Identity Unknown……

Shulagh recalls "This is a poem I wrote when I was 16yrs old, I met Mr Sorensen on several occasions when I was very very young, I have great memories of him arriving in the avenue in a big black hearse type car which I found out later of course it wasnt a hearse but a big old black Taxi, he always had a poodle with him, and a handful of bulbs, great childhood memories….." 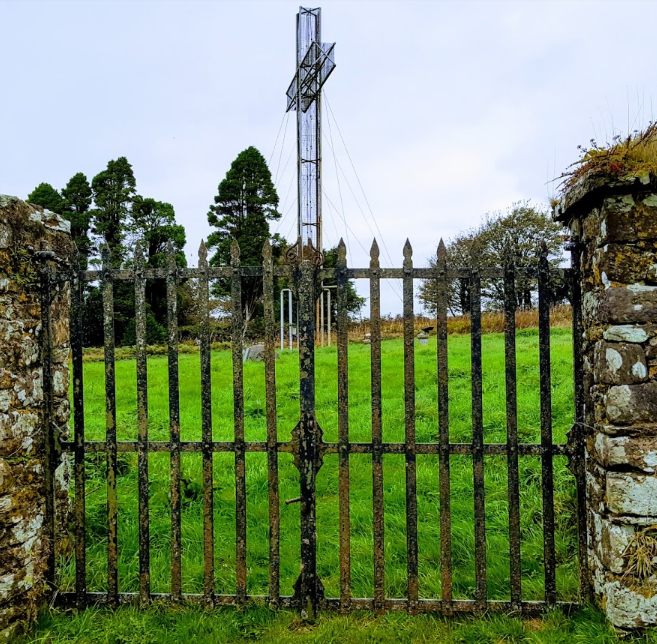 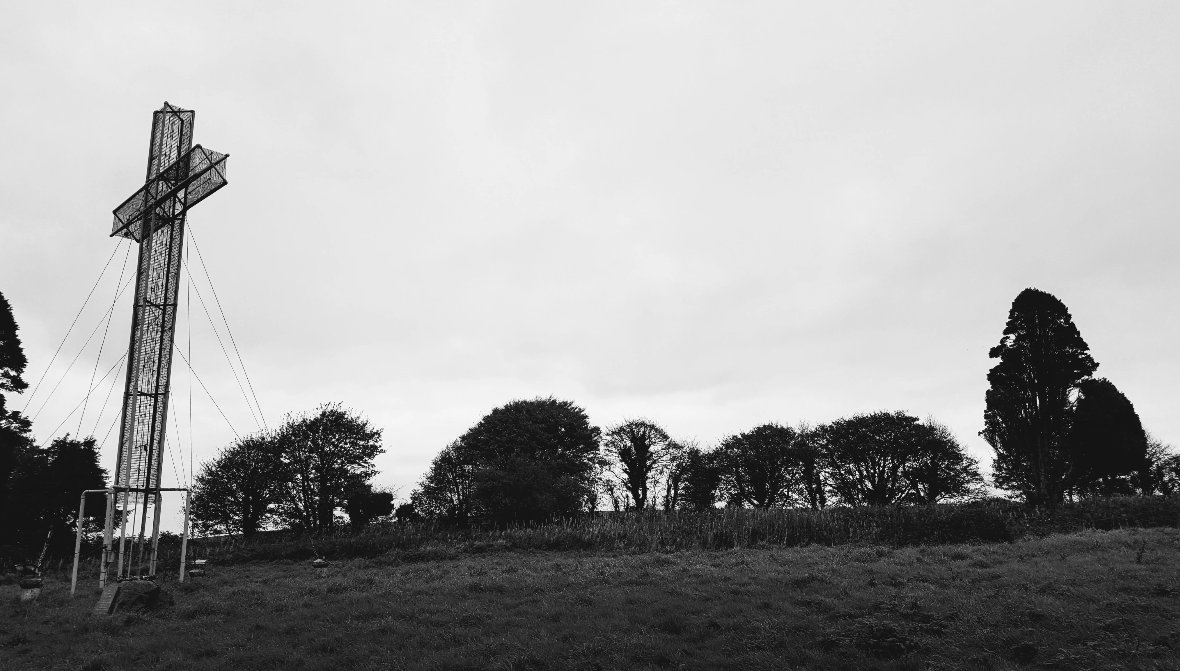 Visiting the All Saint's Famine Graveyard

Caution: The N28 between Douglas and Carrigaline is one of the cities busiest commuter routes. As All Saint's is located at the crest of a hill with poor traffic visibility, please exercise great care and caution when accessing or leaving the area. As part of the access to All Saint's is also via farmland, exercise due care and caution as livestock may be present or farm machinery may be in use. Please close and secure all gates after use. Bring a pair of wellies as well - you'll probably need them.
​
Access details:
One of the city reservoirs faces the busy N28 road with some parking space at the entrance for around four or five cars.
All Saint's is located directly behind the reservoir. There's an old sign nearby which points the graveyard as being 200 meters away but this can be pointing in literally any direction. Between the reservoir and a bungalow is a small lane way with a pair of rusty old gates. Open up the gate and you can make your way up the laneway for about 200 meters to the graveyard. 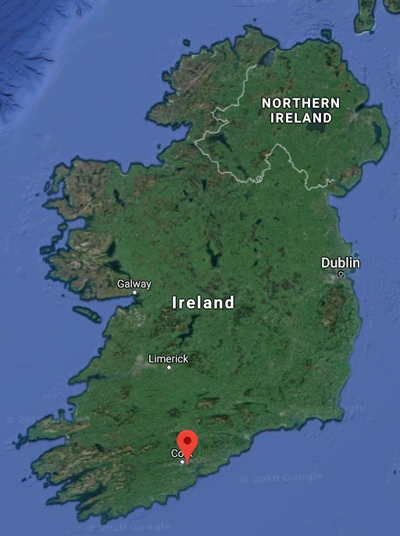 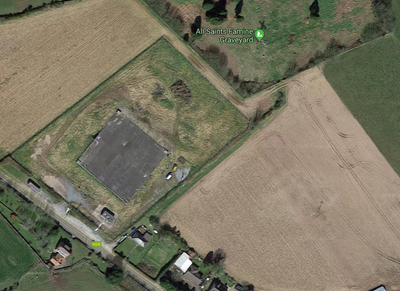 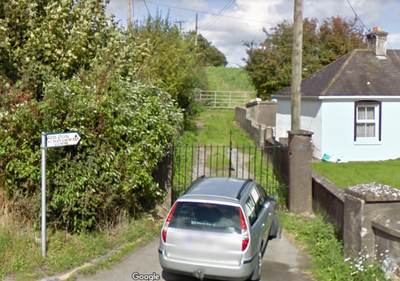 
Thanks to:
Commemorating the Irish Famine: Memory and the Monument by Emily Mark-Fitzgerald. Oxford University Press, 2013.
Shulagh O'Day for use of poem 'All Saint's Cemetery, Carrs Hill'